Just a quick post to call your attention to the new feature to your right. If you enter your email address, you will receive and email whenever the blog is updated. How handy is that?
and now Suzanne :: 5/17/2006 No comments:

Email ThisBlogThis!Share to TwitterShare to FacebookShare to Pinterest
has something to say about widgets

It's been a delicious week as people have stopped by to see the kids' pictures and rejoice with us. There is even a shower in the works and wishlists being assembled. We are feeling, as ever, grateful and blessed.

Lots of people have asked when I think we'll be going back. My completely unreliable and unscientific gut feeling is that on July 20 we will once again depart and our court appointment will be early in the week of July 23-29th. This will put us in Moscow the second week of August and home around the 11th of that month.

Why do I think it will be July 20th? because the Darrington Bluegrass Festival, which we love, will be that weekend and one of our favorite groups -- Doyle Lawson and Quicksilver -- will be playing. So that pretty much assures us that we will be out of town.

In the meantime, we are working a lot and not sleeping well at all as we toss and turn thinking about all there is to do: deal with the FOUR exterior doorways that have no landings or stairs (plywood is looking real good right about now), finish painting (still), clean up the carpenter's dust, get the carpet and the last toilet and sink installed, line up a pediatric eye specialist and a pediatric orthopedic doctor, register with the school district as home-schoolers, figure out booster and car seats, ignore the fact that our old car (one-car family here) is about to retire, furnish the the kid's room, acquire toys and clothes, get the barn and basement kid-safe, clean up all the old nails from the construction site, and avoid the 98 essays (actual number) in my In-box by Blogging! Oh yes, and Jamie is studying for a big exam tomorrow and an even bigger one in early June. And of course there is the usual spring stuff: prune, mow, storms off/screens on.

So, with that in mind, the lack of blogs in the next month should not be a surprise. Check in at the end of May, when we might have better guesstimates of our timeline.

Email ThisBlogThis!Share to TwitterShare to FacebookShare to Pinterest
has something to say about music, trip two 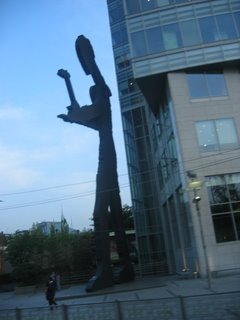 Well I can't sleep so I may as well type up the Seoul report. We knew that we had a hotel room provided by the airline for our 26 hour layover, but we didn't know that it was in the heart of downtown Seoul in the MyongDong shopping center, which, if you are a 20something upscale Korean person, is the place to be on a Saturday night.

After a wee bit of asking about at the airport, we found our way to the correct desk and found a very hospitable young man awaiting us. He scurried us through money exchange and ticket buying and onto the bus to our hotel. As we drove into town, we were a bit surprised to see Hammering Sam's galpal here. We were even more pleasantly surprised to find ourselves in a very nice hotel (excepting the malfunctioning air conditioning of course). 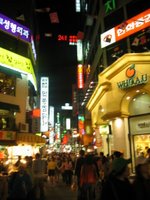 We had a very light complimentary meal at the hotel and then wandered about in MyongDong area. The contrast between Seoul (green foliage, healthful and wholesome looking people, big wealthy city) and Khabarovsk (dead grey late winter, sallow complexions, and Soviet style buildings) was quite sharp. 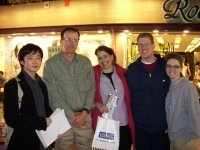 The fashionable streets were filled with fashionable young people and fashionable shops. As we strolled along a young man approached us asking for help with his English language homework. We answered his questions and smiled a lot and eventually his hands stopped shaking. We very graciously presented us with a wrapped gift (two lovely coffee cups) and his profuse thanks. How lovely. There we were in a humongeous city and within the first few hours a stranger gives us a gift. 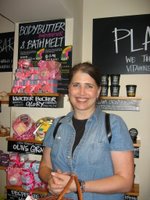 The next morning we made a bee-line for the LUSH store. More pictures? Well, if you insist. (If you have no idea what LUSH is, click the pretty pictures to your right.) There were five LUSH stores in Seoul and I only visited one. How's that for restraint? 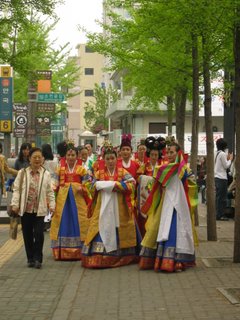 Then we toured a historical but unoccuped palace (I forget which, dreadful, I know) and wandered the streets. The last member of the Korean royal family lived in the palace we say until he/she died in 1989. The Royal family was pretty much decimated during the decades of Japanese occupation. As we strolled along, we crossed paths with these lovely matrons leading a wedding procession. And here is a cute tour guide from the Palace of the Forgotten Name. 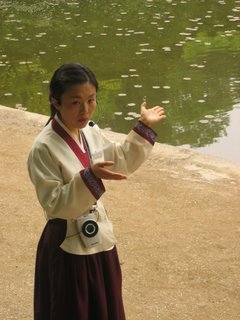 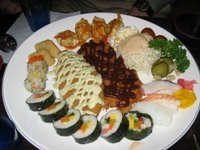 We very much enjoyed Seoul and Korean people: gracious, warm, and wholesome. After a week of being glowered at, it was so refreshing to be able to assume the good-will of strangers. Jamie especially enjoyed the large platters of sushi and I even got brave and tried some kimchee, though I did rinse it off in my Udon bowl first.

Email ThisBlogThis!Share to TwitterShare to FacebookShare to Pinterest
has something to say about LUSH, travel, trip one