and more on the candy theme

Just to clarify, and in response to a few emails and comments:

I started out moving the candy from their bags into a little pile for me, but they decided that I was really just interested in acquiring their candy for personal gain, so I rerouted it into the bag of the sibling.

Prior to the candy incentive, Juliana would 'help' by reminding him, which really didn't help, as it was just another external monitor. Under the new deal, she has a selfish reason to not help him, which, in the long run, actually helps him. He has so radically upped his ability to self-monitor, that he actually loses very few pieces to his sis. She has lost about the same number to him (fingers-in-plate is her pet foible), so it evens out.

I do appreciate your cautions about setting them against each other and I move very carefully in this regard.

Email ThisBlogThis!Share to TwitterShare to FacebookShare to Pinterest
has something to say about parenting

So, I know I may be a bit stricter than most, but it is really important to me that our children have decent table manners. Their previous care-giver felt the same apparently, as the children tell us that she constantly reminded them to hold their forks nicely. Well, I am tired of constantly reminding and would like for the kids to remember this -- and a few other things (swallow before talking, keep your fingers out of your plate) -- on their own.

Christmas brought us a lot of candy which has been stashed into labeled ziplock bags and dispensed in wee portions. The bags have joined us at the table and are wonderful. Each time someone slips in one of the three key areas, one of their pieces of candy leaves their bag and arrives in their sibling's bag. It is amazing. Andy used to need umpteen fork reminders per meal; tonight he needed none.

I think that helping Andy build an internal monitor of behavior is one of the hardest parts. He has before never needed internal control, as his previous environment provided plenty of external control. He frankly states that he shouldn't have to remember things as that is my job to remind him. When candy is on the line, however, he gets motivated.
and now Suzanne :: 12/28/2006 No comments:

Email ThisBlogThis!Share to TwitterShare to FacebookShare to Pinterest
has something to say about Dandy, parenting

(this is an old post that somehow got saved as a draft rather than actually posted. I'll post it now as I have nothing else to say on this blog. All my energies are with my Dad right now.)

At least I know that today's gum had only been in my hubby's mouth prior to Andy's; unlike the time in the Moscow airport when we both realized that he was chewing, and we had not given. EWWWWwwwwwwwwwwwwwww.
and now Suzanne :: 12/24/2006 No comments:

Email ThisBlogThis!Share to TwitterShare to FacebookShare to Pinterest
has something to say about Dandy

a DIY kind of gal

Chickadee got tired of waiting for me to trim her bangs, so she did it herself. About a quarter inch long.
and now Suzanne :: 12/20/2006 No comments:

Email ThisBlogThis!Share to TwitterShare to FacebookShare to Pinterest
has something to say about Chickadee 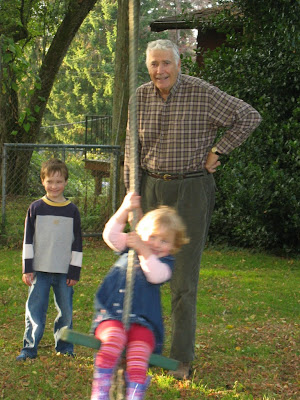 Thank you all so much for your kind words regarding Dad. I'm going to ask that, if you don't know us face-to-face, you comment only on this blog, as I print the other blog for Dad and it's so confusing to him when I try to explain my e-friends. So we'll treat this a place for messages for Suzanne and the other blog as a place for messages for Dad and Mom and family. Does that work?

He lives. His blood pressure was 50/33 and his core temp 80 degrees. Both of these are indicators of imminent death, yet Dad lives. He is indeed paralyzed, but other than that (and the 8 broken ribs) has no major health issues and is quite strong for a 71 year old. Last night the rehab doc assured him, that other than using a chair and having a rather complicated way of handling waste products, he'll be able to live a relatively normal life: go to church, go to grandkids' sporting events, do many of the things he loves to do. He won't, however, be cutting his own firewood anymore.

Email ThisBlogThis!Share to TwitterShare to FacebookShare to Pinterest
has something to say about Dad, paraplegia

We've been working on finding something more pleasant to say when someone gets something we want and we get nothing. We've ruled out saying "ME ME ME ME" and "I want one! I want one!" and decided that saying "I'm happy for you," would be nice. Jamie and I have been role-playing this and the kids have been practicing it in silly ways.

This morning, Juliana showed Andy the very cool mini-flashlight that she acquired yesterday during her big day in Seattle. You have to know that for Andy-The-Gizmo-Kid, there is nothing more attractive than an item that has both buttons and lights. With shaking voice he looked at it and said, "I'm happy for you Juliana." Then he burst into tears.

I'm so proud of him! I buried him in hugs and told him what a good boy he was.

In the orphanage they didn't give things to children unless they had one for everyone, or if it was a shared item. The idea of one child having a private possession and the other child not having is a big new concept. We are so pleased that they are accepting it.

Yesterday we went to Children's to see a doctor who said that Juliana was tiny. We are seeing a series of specialists who are all ruling out bad things, so it is rather good that all the doc has to say is that she is very small. We don't want the doc coming into say that she has some really interesting and unusual condition. But still, driving all that way to hear that she is little seems a bit unproductive.

My mom went with us and we redeemed the drive by going to Bellevue. We stopped in to visit my Father-in-law at work who was very pleased to see us. Then we went to the mall and rode the glass elevator up and down and waved at all the giant snowman and gasped at the flying reindeer and visited the LUSH store. We tried very hard to visit Trader Joe's, but after an hour of driving (slow progress due to street-lights being out), we got there only to find them without power and closed. They couldn't sell anything, as neither their tills nor fridges were working, but they did have a little generator going to keep the lights on; they kindly let us in so that Juliana could use the bathroom. At long last, I finally got into a Trader Joe's, I just didn't get to buy anything.

So that is all the news. Part of my long lull in posting was a case of the blues brought on by the return of Holly's cancer. Surgery is on Friday.
and now Suzanne :: 12/14/2006 No comments:

Email ThisBlogThis!Share to TwitterShare to FacebookShare to Pinterest
has something to say about critters, Dandy, parenting, shopping

Not much I can report. We are all fine. I'll post more when I'm feeling articulate and interesting.
and now Suzanne :: 12/12/2006 No comments: 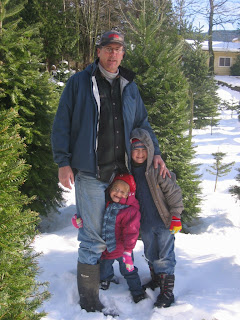 Last Saturday we went and got our tree at our favorite tiny little tree farm in the foothills. On Sunday, we decorated the tree with all the wooden and cloth kid-friendly ornaments I have been acquiring for years. Andy and Juliana loved decorating the tree and have added 'make the house pretty' to their daily list of that for which they are thankful.

We don't currently have a working audio system in the house (long story) so we were decorating without music. This seems just wrong and I commented upon it. Juliana then started singing "Jesus loves me". What better music could I wish for?

is very popular. Kate asked if we are doing this long-term. We will be more home-school than public school until we are quite sure attachment is solid.

We did the letter "B" last week:

"Ball. Banana. Bunnies. Bread. Breakfast. Baby." I said.
"Mama doesn't like babies," Andy replied.
"Yes I do! Why do you think that?"
"Why did you give me to the detskydom (orphanage)?"

All this time he has thought I parked him there for six years because I didn't like babies. The amazing thing is that he 'welcomed me back' with open arms and heart. After I explained that I was a new Mama on the scene he said it was very sad that we had had to wait so long. "I needed you," he said. "I was a sad baby. I needed you no bolshoy padashdi (big wait)."

I'm sure the school can do a more efficient job of teaching him his letters, but if I let them do it all, I'd miss conversations like that one.

Email ThisBlogThis!Share to TwitterShare to FacebookShare to Pinterest
has something to say about attachment, Dandy, holidays, school

Email ThisBlogThis!Share to TwitterShare to FacebookShare to Pinterest
has something to say about poetry

If you are familiar with LeapPad's alphabet video, you'll know the tune to these lyrics, slightly modified by Andy and Juliana:

Email ThisBlogThis!Share to TwitterShare to FacebookShare to Pinterest
has something to say about Chickadee, Dandy
Newer Posts Older Posts Home
Subscribe to: Posts (Atom)