We are All Socialists Now: I's in your government, stealing your freedoms

For a long time now, I have assumed that the problem was that the American people had not noticed the Socialist take-over. Then I saw this: 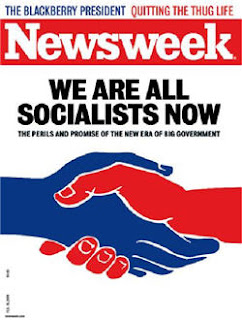 So the problem is not that Americans haven't noticed. It's worse. We apparently don't care.

One of my high-school friends sent this to me today. I'm still working on verifying the quote sources (do you know where the quoted passages came from?), but I wanted to share it with you in the meantime. The biographical content is straight from Wikipedia.


I have friends and family who support the Democrats and I am sure that they have no idea what it is they are actually supporting. It all sounds so charitable and nice on the surface, but it tyranny underneath.

Email ThisBlogThis!Share to TwitterShare to FacebookShare to Pinterest
has something to say about socio-political commentary

I believe that was quoted in Liberal Fascism--I remember reading it somewhere recently.

"I's in your government" ? I wonder- is the writing teacher indulging in "racial commentary", right along with the so called "socialist" slam?

Nothing 'so-called' about the socialist slam. I'll slam socialism whenever I can and be quite up-front about it.

Who are you, btw?

Recent blog post: We are All Socialists Now: I's in your government, stealing your freedoms

I thought the same thing! I thought people didn't KNOW they were turning into little socialists. Then, when I saw that cover last week I felt a little sick.

They know.
And they don't care.

It is sad and it is very scary. I recently wrote a couple of posts about this and got maybe one or two comments. Now, I know my readership is not that high but I really expected more than one or two comments. It seems that people are just apathetic about what's going on. I am ready to march on Washington D.C.!

Better yet, Lea, march into your local GOP monthly meeting and speak up.
The change we need is going to have to be a bottoms-up change, not a
top-down.

Or, if you are a non-Socialist Dem, march into your local Dem monthly meeting and speak up.

Hi Suzanne. One of the main reasons conservatives are getting no traction in their complaints at the moment is that their credibility is shot. Extravagent warnings on the dangers of fiscal irresponsibility ring hollow when the right was silent as Bush turned surpluses into deficits and Cheney said deficits don't matter. Cries of "tyranny" are hard to take seriously when conservatives demurely averted their gaze to wholesale warrantless wiretapping, politicization of the Justice Department and the repeal of habeas corpus. At my site I've been screaming about this for a while and pleading (e.g. http://www.pruningshears.us/pruning-shears/2007/7/20/calling-conservative-patriots.html ) for conservatives to stand on priniple while their guy was the one trashing the Constitution. By and large the right didn't; people have appropriately concluded all the hue and cry now is because it's a Democrat doing it, not because it's a violation of some deeply held principle. And if you look at my site you'll see more criticism of Barack Obama in his first month than major conservative sites made of Bush during his entire tenure.

I think Dan (above) pretty much nails it -- as do many of the writers at American Conservative (the magazine of real conservatives). Perhaps what we have to deal with here is the enormous philosophical distance between the contemporary Republican party (dominated by a radical faction of the right) and conservative Republicans who are committed to individual liberty. Many Democrats have been dropping away from their party (though not President Obama) because of the same threats to individualism within their party. In the GOP, individualism and self-determination seems to have died a sad death. Just look at the numbers of people on the right who are proud -- proud! -- to call themselves "dittoheads"! So this doesn't sound like an informed protest against genuine socialism to me. It sounds, as Dan implies, as though the GOP is playing the sore loser game. Maybe we'll all grow up one day soon?

"the enormous philosophical distance between the contemporary Republican party (dominated by a radical faction of the right) and conservative Republicans who are committed to individual liberty."

and Yes: "One of the main reasons conservatives are getting no traction in their complaints at the moment is that their credibility is shot."

And that is exactly why I am involved in my local party, not because I love what has happened over the last 8 years, but because I hate it and the only way to be an influence of change is to get involved.

"the enormous philosophical distance between the contemporary Republican party (dominated by a radical faction of the right) and conservative Republicans who are committed to individual liberty."

and Yes: "One of the main reasons conservatives are getting no traction in their complaints at the moment is that their credibility is shot."

And that is exactly why I am involved in my local party, not because I love what has happened over the last 8 years, but because I hate it and the only way to be an influence of change is to get involved.

It's good that you've been spurred to activism, but I think you missed a big point I wa making: Credibility can only be rebuilt by taking on your own side, not by going after those you oppose. Consider this:
http://www.newsweek.com/id/187342/output/print
And this:
http://harpers.org/archive/2009/03/hbc-90004488
Horton put it best: "We may not have realized it at the time, but in the period from late 2001-January 19, 2009, this country was a dictatorship. The constitutional rights we learned about in high school civics were suspended. That was thanks to secret memos crafted deep inside the Justice Department that effectively trashed the Constitution. What we know now is likely the least of it." Why not spend more energy calling for investigations into that? Going after Obama is relatively small game - why bother with the Constitution after it's already been shredded? And it makes you look like a garden variety partisan to boot.

Well said, Dan. There are some good posts around, BTW, making clear the difference between Bush's "legallized" torture and Obama's refusal to make rapid changes. I'll try and find a link.