14 years ago today my sweetheart proposed to me.

Here is my engagement meme.

We were a blind date. We met in the foyer of the home of one of his friends who was the boss of the insurance company where I was working at the time. The daughter of the family had thrown herself into my arms as I walked in the door which distracted me so that I was barely paying attention to the introductions. I heard names exchanged and turned to meet someone. I looked into his eyes as he took my hand and I fell head over heels in love.

2. Tell about the first date.

Not counting the night we met, our first date started with me bring late. Really late. We had agreed to go for a walk in a park and I was a bit unsure on how to get there. I actually turned the car around once, just a block or two from the park and drove to the other end of the lake so that I had to turn around again and drive back. Then I got to the park and found his jeep (filled with clay boxes) but couldn't find him. The first words out of my mouth when I did find him was "I'm so glad you are a patient man."

We did go for our walk and out for dinner. Midway through the meal the lens in my glasses fell into my plate. Yeah, I'm that kind of clutz. Being the gentleman that he is, he somehow arranged for the lens in his glasses to follow suit a few minutes later. Or maybe it was all that electricity passing between us. Whatever it was, I felt so much better with a fellow clutz.

3. How long have you known each other?

4. How long after you met did you start dating?

A fraction of a millisecond. I looked into his eyes as we were being introduced and that was the the end of that and the beginning of everything.

We made polite conversation with our hosts all evening and then he walked me to my car. It was really really cold and we stood outside and shivered and talked for two more hours. At some point he matter-of-factly stated, "I'm going to need your phone number."

Then he didn't call for 3 days. Argh. I hardly breathed for 3 days for fear I'd miss the phone call.

5. How long did you date before you were engaged?

Nine months and 8 days; about nine months and 7 days longer than necessary if you ask me. The morning after I met him I called my mom and told him I had found the one. Then both my cranky cat and my Dad liked him, which was hitherto unheard of on both counts.

6. Who was the first person in your family to meet him? 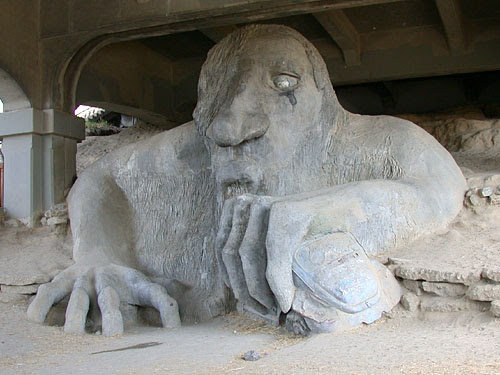 My youngest niece. She was five and we went to Archie McFees and looked at all the silly merchandise and the big troll under Fremont Bridge. He hung back and let the auntie/niece pair take priority, which I thought was so thoughtful.

7. Where did you meet his parents?

I met them on 4th of July. We all went to Lake Union and watched the fireworks and shouted small talk.

8. Where did he meet your parents?

I brought him home for my late August 30th birthday party at my parents' home.

9. How long was your engagement?

On a table made out of crate covered with a towel in the empty building we were transforming into a pottery shop/craft store. He set up champagne, two plastic glasses, a small bear, and a Valentine card. The card asked if I would be his Valentine, and his wife.

Valentine's Day
:: this post was submitted to Scribbit's February Write-Away contest.
:: hat tip to a wrung sponge for the candy heart.
and now Suzanne :: 2/14/2008

Email ThisBlogThis!Share to TwitterShare to FacebookShare to Pinterest
has something to say about my Gift from a generous God